Designed by CGHJ Architects, in Tampa, Florida, the architecture features spacious glass-railed balconies overlooking and an endlessly wide white sand beach leading to the pristine waters of the Gulf of Mexico.

The developers and architects selected our digital photorealistic rendering style to properly portray the beautiful contemporary design and casual beachfront luxury to prospective guests and neighbors.

In order to accurately depict the relationship of the buildings to the beach and ocean, it was decided that an aerial view would be used for the rendering. The developers provided an aerial photo taken before construction was begun for Genesis artists to work off of. 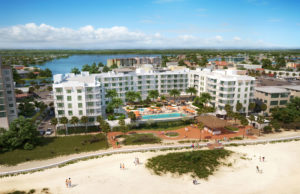 Our artists then modeled the buildings and site from AutoCAD drawings provided by the architects.

The modeled architecture and site were then aligned and merged with the aerial photograph, perfectly in place and to scale. By placing an architectural rendering atop a photograph, the viewer is assured that the rendering accurately represents the project.

An additional low aerial rendering was created by using aerial photography from which to meticulously and faithfully model the surrounding buildings and Boca Ciega Bay in the background. Creating a digital rendering of the site was the only way to provide context for the luxury accommodations, since there were no photos from the desired angle.

Another important consideration was the proper representation of the lush landscaping. All plants and trees on the landscape plans were carefully researched and composed to gracefully frame the architecture.

The impact of a rendering can be diminished without the proper placement of entourage, such as cars, people and landscaping. Genesis Studios takes great care to employ a convincing entourage in our architectural renderings.

The renderings are now being used on the Treasure Island Beach Resort’s website to successfully attract future occupants.

For more information on turning your architectural rendering dreams into a visual reality, contact us at info@genesisstudios.com or 407-539-2606. 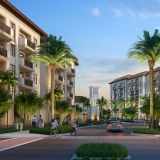